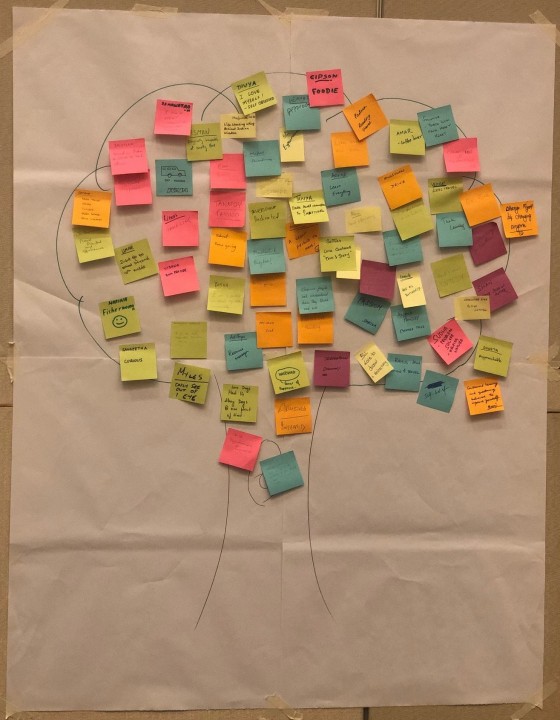 We as Millennials saw an era where talking to friends outside homes was normal followed by yahoo chat followed by ICQ followed by WhatsApp and nowadays people like to play games at home. The whole life has circled back for me when I think about Agile and how people are so important. The people and their interactions are very critical in any environment or setup and so it’s often important to break the ice and go beyond the conventional talks where all we hear is people cribbing about work or their work timings.

There is a practice in Management 3.0 called Personal maps which targets at making individuals talk about themselves. The idea is for each person in the team to take a A4 paper, write their names in the middle of the sheet and then draw bubbles around to depict themselves thinking outside the office about their interests and aspects which they generally don’t share in a normal conversation.

The activity is a big noise creating event. You get out so many things which you would never have thought to know, and it’s so surprising that people sitting next to us had so many common interests which we never thought.

We basically draw ourselves on the paper, and then exchange that page with the person sitting on right who describes you using the paper, doing these multiple times, knowing people in the room. The more we make people introduce the more they come to know how they really didn’t know the real person.

Not taking names, I had 2 girls working in same team doing same kind of dance, we got a movie producer in one of our session while in another I got a person who owned a resort! Just imagine these people never struck conversations bringing these aspects out. The best part is the common ground items coming out like someone having interest in books, other in cartoons, you get more grounds to talk to people.

We then create a tree out of the map near the desk, so that if a new person joins the team, they can get to know the team using the tree.

This is the method prescribed. I’ve tweaked it a lot of times asking people to dig into it to find 1 interesting thing of the person which they need to reveal it in end. Sometimes I make a tree only about interesting things people find.

In the end we live in a world where people interact and we need to recognize that people are important because an individual success might be good, but a team working well is the best as teams rally towards a cause and make it a great thing. Good teams always shine and are often asked for best practices.

I’ve also done this for remote teams having multiple video feeds interacting and it has been amazing experience. All this we can so much relate to the focus on individuals and interactions.

I recently used the same for a deep dive in Spark Business Agility Conference and people liked the idea. We had a great tree created in end with names and 1 interesting thing about the people in the conference.

So, I recently did this at 2 different places and I would like to update the post on those 2 places, because I felt the implementation was great.

The first instance was with kids. I was doing a motivation workshop with kids from 10th-12th class. The activity went like this:

I started distributing colored A4 sheets, crayons, colors. The kids work with personal maps was sheer fun! Not only were they creative, but willing to express themselves truly on paper. Seeing their enthusiasm, we had to extend the time meant for the activity. It made me think that ultimately, we are all kids at heart. Whenever I ask people to put themselves on paper, we feel so happy and excited, much like these teenagers.

Now when you think of a personal map, all I’ve seen is people saying someone loves driving, dance, singing, but some of their personal maps gave me goosebumps. Again, the work done with kids prior to me made them feel so safe that their personal maps brought about some very private things like their social life, their relationship with their parents, their agony and anger. Their personal maps were not just what they liked, but their feelings, their dreams, their aspirations, their goals, the ugly things in life, the good things in life. Some of them writing the maps were looking so serious, for a second, I really thought this was something so different.

Following this, I made them then sit in pairs as the original activity and talk to each other. Seeing some of the kids map, it made me feel we as adults are so scared being vulnerable even with our closest friends. It was amazing to see them so open with each other. It was tough, but they did it. I made them go through two-three rounds and I saw some good conversations happen. As always when I do this activity, I tell people to dig in more than what is there on the paper, and again some very interesting things came out in the end discussion.

The second instance was the Bangkok Management 3.0 Retreat. While coming into the room, meeting some highly motivated people, saw Ralph putting up 4 charts lined up against each other. Looked interesting in the first look itself.

We then started the activity with 4-5 people at one go drawing their maps (since it was all facilitators, we all knew the drill). The interesting part was when we were done, we started connecting things we missed from our maps to the other map, and that was so much fun! The connections were from the first chart paper towards the end. And that showed us that while being from different countries and continents, we all had common grounds where we connect. There were Netflix fans, Marvel fans, someone liked hiking, someone loved swimming, and what all not.

While everyone was looking at the map, suddenly an “aha moment” used to come that yes, I like this too, and people used to draw a line from their name to the where the interesting thing was. And this happened over and over for the next 10-15 minutes.

Self-reflecting on this, seeing the common ground across the team was interesting, and obviously this made us know about each other in a good way. Again, very powerful method for interactions.

If you want to learn more on the Personal Maps, you can check out the management 3.0 page here on the same.